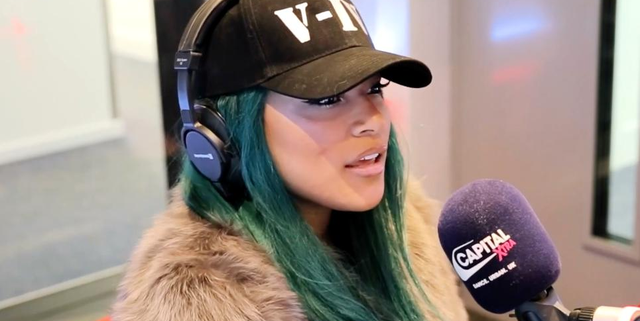 Real Ting is the first project of the impressive rising young London MC Stefanie Allen (aka Stefflon Don). The mixtape is a slightly rocky intro, but her raw talent shines through.

In late 2015, then-ascendant South London rappers Section Boyz made their presence felt with “Lock Arff,” the breakout single that netted them a place on BBC’s Sound of 2016 longlist at the end of that year. It’s usually an indicator of success when a song gets remixed—“Lock Arff,” a sprawling opus that boasts contributions from each member of the six-person crew, left little room for anyone else to get a look-in between verses. But a version with two new verses by Stefanie Allen (aka Stefflon Don), stripped of everything but the original beat and chorus, impressed the Section Boyz enough that they cosigned its official video treatment. The remix and video in turn raised Stefflon Don’s profile enough to land her on the 2017 Sound of… longlist at the end of last year.

In between, the young London MC stayed busy—churning out more remixes or hopping on songs by compatriots like Angel and grime veteran Lethal Bizzle. All of that that momentum culminated in Real Ting, her first full length solo project, released just before 2016 drew to a close.

With a running time of under 40 minutes, the tape’s rocky start is acutely felt, taking up more space than it should in proportion to the remaining nine tracks. “Intro” is a somewhat cartoonish announcement of Allen’s formal arrival on the scene (“Look to the sky, it’s a bird, it’s a plane, it’s a Don!”) set to an excerpt from Nile Rodgers’ Coming To America score. The melody plays during the scene in which King Jaffe Joffer tracks Prince Akeem down in Queens; from the eastern borough Allen bears south for inspiration on “Real Ting.” It’s startlingly derivative of Brooklynite Young M.A’s “OOOUUU”—from the punchline delivery to the ad libs.

Comparison to established artists can be a boon or a blight for an emerging talent, foreshadowing similar levels of success in the former case or inviting dismissal in the latter. Since “Lock Arff” went viral, discussion of Stefflon Don has often touched on the parallels between her and Nicki Minaj: owing to her cadence, a penchant for brightly-colored hairstyles and a tendency to slip back in and out of Jamaican patois, which can resemble Minaj’s Trinidadian Creole to the untrained ear. Thankfully in Allen’s case the similarities seem both incidental and positive; no rapper could or should corner the market for bravado, and Stefflon Don clearly possesses a lot of it.

Real Ting picks up steam by track three “Tight Nooki,” an upbeat dancehall jaunt featuring Jeremih. It capitalizes on the unstoppable “Bam Bam” riddim, made famous by Chaka Demus & Pliers in the early ’90s, and complements the pair’s previous collaboration on Jeremih’s Late Nights: Europe mixtape. “Family Ties” is deeply personal, touching on a childhood marked by violence and her mother’s legal troubles (“She was looking at ten but the lawyer beat the case/By the grace and the power or the mercy of the state.”) The family affair is rounded out by her brother Dutch, who goes into detail about his own run-ins with the law, and UK House star Donae’o. “Envy Us,” another dancehall-tinged standout with an assist from Tottenham upstart Abra Cadabra, is a good example of the rhythmic space for which Stefflon Don’s voice is well-suited. But the tape’s overall scattered quality positions it as a teaser of things to come rather than a cohesive collection.

It’s hard to tell if or where the line between a mixtape and an album should be drawn—in 2017 a mixtape can be the vehicle for an artist’s unpolished experiments, or be in with a serious chance of winning a Grammy. On Real Ting, listeners get a proper introduction to Stefflon Don and a fuller understanding of her artistry. She sings as well as she raps, is a scholar of many genres (trap, dancehall, house and more) and has wide-ranging influences; the outtake from a Margaret Thatcher interview on “Lik Down” and even the antics of “Intro” are revelatory of her cultural interests beyond the music. So if Real Ting is her CV, it’ll be fun to watch her find her footing at work.