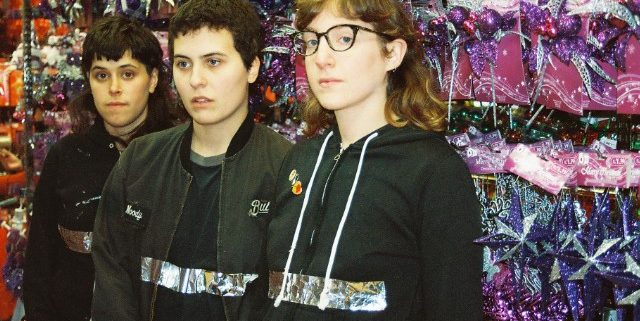 By Rolling Stone and Jane Chardiet

For Fans of: The Raincoats, the Residents, Half Japanese

Why You Should Pay Attention: After two well-received cassette full-lengths, Brooklyn/Philly noise-rock trio Palberta are finally going straight to vinyl for their third album, Bye Bye Berta. For their first release for Brooklyn’s Wharf Cat Records, the D.I.Y. staples sing disjointed playground punk that embraces both dissonance and innocence, trading instruments as quickly as they change ideas: A good 80 percent of the songs poke and scurry off before two minutes are up. “At this point writing short songs feels more intuitive for us than intentional – it’s the natural way,” says Nina Ryser. “It kind of reflects the song writing process itself: frenzied, fast, kind of jumbled.”

Though Palberta recall angular British post-punkers like Liliput and the Raincoats, the band is more likely to be listening to Al Green, Fleetwood Mac and Arthur Russell these days. To wit, the highlight of Berta is their cover of “Stayin’ Alive,” a spectral, funky, 68-second deconstruction of the disco classic in the tradition of the Slits’ “I Heard It Through the Grapevine.”

“‘Stayin’ Alive’ is one of the greatest songs ever, it makes you feel like a million bucks!” says Ryser. “We only knew fragments of the lyrics so Lily [Konigsberg] decided to stick with her rendition: ‘Jenny’s eatin’ burgers and everyone’s uh-shakin and uh-stayin alive.'”

They Say: “We still switch instruments as a result of writing our songs in different formations. It’s a great thing, because we’re all eager to learn and grow as drummers, bassists and guitarists, so it gives us a chance to rock on each instrument,” says Ryser. “The drawback is that it lends itself to pretty awkward transitions when we play live – mostly because breaking up loud, heavy songs with silence can be awkward. Lots of muttering aloud as we pass instruments to each other, sometimes someone is stuck with a bass and guitar in each hand, tripping over cables.”

“It happens all the time and it’s hilarious,” adds Konigsberg. “The transitions, though sometimes awkward feeling, definitely add to our performance and make it more uniquely Palberta.”