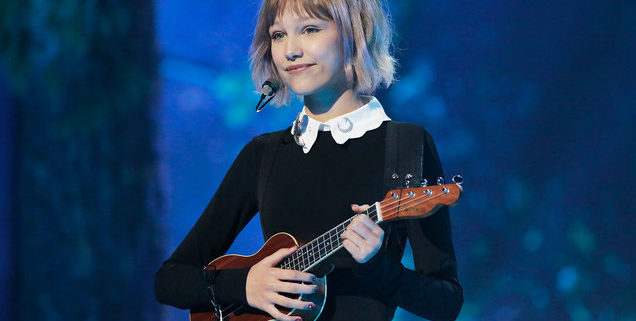 New York’s Grace VanderWaal is a heartfelt pop singer best known for winning the 11th season of NBC’s performance competition America’s Got Talent. Born in Kansas in 2004, VanderWaal grew up in Suffern, New York, where she first showed interested in music around age three, singing on a wireless microphone. Later, she played saxophone in the school band and, at age 11, taught herself to play ukulele by watching online videos. Soon, she was writing her own songs and performing at local open-mike nights. In 2016, she successfully auditioned for America’s Got Talent, performing her original composition “I Don’t Know My Name.” A popular competitor from the start, VanderWaal ultimately won the series, becoming the second female and second child to do so. She signed to Columbia Records in 2016 and released her debut EP, Perfectly Im, featuring her single version of “I Don’t Know My Name.” The album debuted at number nine on the Billboard 200 chart. The non-album single “Missing You,” appeared in 2017.