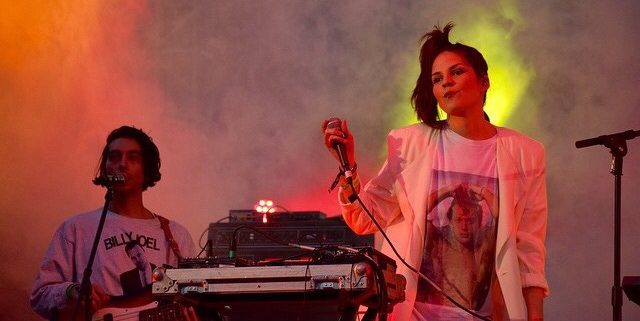 An experimental duo whose music is a witty yet sensual fusion of funk, pop, R&B, Latin, and electronic influences, Buscabulla were formed by Raquel Berrios and Luis Alfredo Del Valle, a pair of Puerto Rican émigrés living in Brooklyn, New York. The two first met in 2011, when Del Valle attended a house show where Berrios’ insouciant acoustic duo En Teta were on the bill. Berrios and Del Valle soon hit it off, and became romantically involved. Both were of an artistic bent — she was a designer, songwriter, DJ, and music producer, while he was a multi-instrumentalist — and before long they began working on music together. They adopted the group name Buscabulla, a Puerto Rican phrase meaning “Troublemaker,” and were soon looking for outlets for their music. After winning a contest sponsored by Guitar Center and sneaker manufacturer Converse, Buscabulla were awarded studio time and the services of producer Dev Hynes, which led to their debut EP. The self-titled four-song release was issued by Kitsuné Music in 2014, and earned positive reviews. One of the songs from the EP, “Métele,” was used in the award-winning film film Mala Mala, a documentary about Puerto Rico’s transgender community. Producer Roberto Carlos Lange became a fan of Buscabulla, and invited the duo to open a tour for his Helado Negro project. Lange continued to show his support by appearing on Buscabulla‘s second EP, fittingly titled EP II, contributing vocals on the song “Frio.” EP II once again earned enthusiastic reviews, as did Buscabulla‘s video for “Tártaro,” shot in a rundown love motel in Puerto Rico.