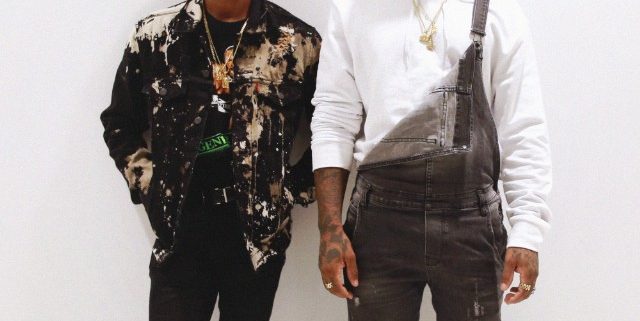 Together, Dante and Drew are THEY., two like minds determined to shatter expectations and trash perceived genre parameters. Their debut album, Nü Religion: hyena, cannot be boxed in as simply R&B. Listen a little harder—to the minor chord guitar ripples on “Motley Crew,” the jarring futurist verses of “What You Want,” with its swaggering pop topline. Then there’s “Dante’s Creek,” with the unexpected lift from the Dawson’s Creek theme tune. THEY.’s inventiveness is stitched into songs full of surprising cadences and musical swerves.

Born in Denver, Colorado (with stints in Oklahoma—after his mother passed when he was 15—and Chicago), Dante grew up pillaging his mom’s record collection. His love for Cameo, Prince, and Ready for the World segued into New Edition, Guy, and Bobby Brown. But he’s also very much a child of the 90s, religiously tuning into MTV and VH1, watching as much TRL as Oasis and No Doubt videos; he voraciously consumed issues of Vibe and XXL, immersing himself in the work of The Diplomats and Juvenile. Likewise, Dante floated between cliques at school. For instance, from his friends on the basketball team he got into Fall Out Boy, Senses Fail, and Circa Survive, meanwhile in secret, on is brother Marvin’s MPC, Dante would make beats and record one-take raps. Early on his focus lay largely in production: “I wanted to be able to sing and Drew encouraged me to sing certain parts on the album. There’s a certain texture to my voice that actually works on a lot of the songs.”

While Dante was spending his teens jumping from genre to genre, Drew—who was born in San Antonio and raised in Maryland—grew up exposed to an equally diverse palette of sounds. In his mom’s car it was Diana Ross and Smokey Robinson; in his dad’s, Funkadelic and Kenny G. He declares Hansen’s “MMMbop” was his favorite song for the first few years of his life, while also celebrating sheeny pop of N*Sync and Britney’s “…Baby One More Time.” Drew would sing in the shower, manipulating his voice to imitate his idols. “I think because of all the different musical influences, I just kind of channel it all into my own jambalaya mix of how I approach everything.”

But Drew’s adolescence was markedly different to Dante’s. His parents were in the military and Drew’s instinct has always been to push against strictures. “I was combative,” he says. “I didn’t like to listen to anybody.” While this innate stubbornness would stand him in good stead as an artist seeking to forge his own sound later, initially, music was simply an escape: “I was severely bullied all through middle school and high school,” he explains. “I was easily the least popular kid in school for sure—the butt of every joke. I always wanted to get revenge on those kids, but not in a violent way. Music gave me an outlet.”

There was one other crucial twist of fate and talent that accelerated the pair’s ascent from the studio to center stage stars: When Dante first moved to LA he fell in with electronic producer ZHU, which organically lead to Dante meeting the Mind of a Genius crew, whose roster boasts ZHU, Gallant, and Klangstof, and now THEY.. So in 2015 when ZHU was looking for that final hook on collaboration with Skrillex, THEY. stepped up. To date “Working for It” has been streamed 150 million plus times.

In many ways, Nü Religion: Hyena is their mission statement, songs that take the traditional and turn that on its head, but also say something. It’s on “Silence,” with its sparse sensuality and rippling hi-hats, that Drew feels the most exposed (“It’s about that moment right after the climax when you hit that cigarette or that blunt, when you’re not saying anything and she’s not saying anything.”) Elsewhere, on the bristling “Say When,” which Dante acknowledges marries Rage Against the Machine’s ferocity with trap tropes, the producer and singer holds a mirror up to society.

THEY.’s record, and indeed their overall mindset, is one of progression—that’s their nü religion. As for the hyena, well what is a hyena? Feline or canine? “They can’t really be classified,” says Dante. “That’s a little bit how we feel, especially with this project: Hyenas are still feared and they’re outsiders too.”