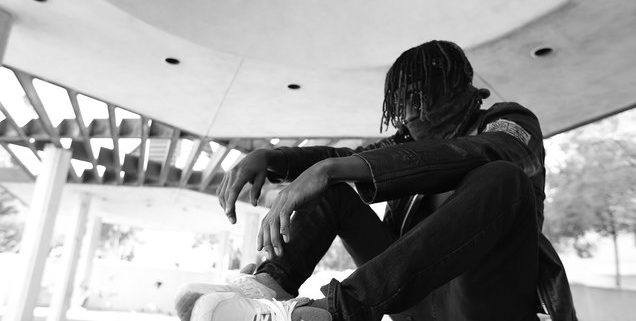 Years before a burgeoning songwriting career that included working with Nicki Minaj, French Montana, Big Sean and Tyga, among others, the artist born Melvin Moore was a young boy living in Kansas with his parents — his mom did theater while his dad was a percussionist — and little brother.

Early on, Moore let out his artistic expression via oil paintings, sketching and drawing portraits before beginning to rap in church. Family background aside, he set out to do music professionally, noting, “Nobody forced me to do music.”

Taking up guitar and piano as a young adult, Moore credits multi-platinum Grammy-winning singer/songwriter/producer Raphael Saadiq and critically acclaimed jazz musician Norman Brown as inspirations. After moving to Los Angeles around 2008, he met Saadiq, who played a pivotal part in his career, allowing him to use his studio for free and gifting him industry lessons.

He recalls of Saadiq’s suggestion to play guitar, “Raphael gave me the ‘pick this axe up, never let it down, and it will pay you in the long run.'”

The grind has paid off so far for Moore, whose first writing placement was Trey Songz’s 2011 track “Unusual” featuring Drake before going on to work for several months with Robin Thicke for his 2013 Blurred Lines album.

Around 2015, he circled back to longtime connect Chris Brown. “I had a relationship built with him and [singer] Sevyn for years,” he recalls. “So I ended up in a position where he was open to take songs, and we would email him song after song, and he just started cutting them.” He adds, “He cut about 75 songs this past year of mine. He’s one of the hardest-working artists there is. He’s like our generation’s Michael [Jackson].” One of the songs sent to Brown ended up being the recent No. 1 Rhythmic Songs hit “Party” featuring Usher and Gucci Mane.

Having had success as a songwriter, Moore always envisioned stepping out as an artist. “I’ve always wanted to shed my own light on the music that I was writing. I always wanted to have my own voice — that was the plan from the jump. I just knew that writing was a way to gain leverage.” For his solo debut, he tapped Breezy. “‘Jiu-Jitsu’ was one of those in-the-moment creative vibes where I was playing off words. I need ‘jiu’ like ‘jitsu,’ just finding a metaphor. I wrote it with my friend, Prince Chrishan, aka PC.” Moore played Brown the song who then wrote and recorded a verse for the record.

With upcoming collaborations including PartyNextDoor, Black Youngsta and Jeremih slated for his album, Moore hopes that his music brings a message of encouragement and motivation: “My ultimate goal would be to leave a legacy and to inspire everybody else that does music or just wants to be successful.”

“Jiu-Jitsu” is now available for purchase on iTunes and via all streaming platforms.