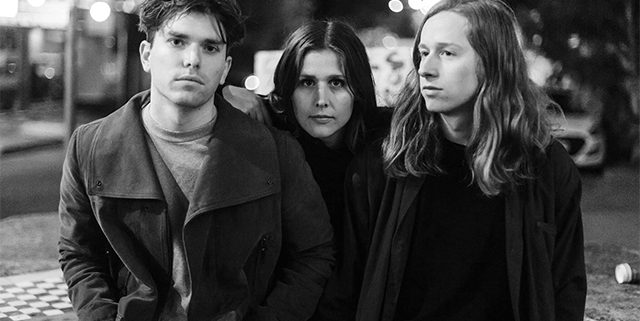 Sydney indie pop trio Middle Kids burst onto the scene off the back of their first single and a starry endorsement. Classically trained piano player Hannah Joy and multi-instrumentalist Tim Fitz first met in 2014, and Fitz began to produce her solo work as well as playing in her band. Following a series of Bandcamp solo releases for Joy, the pair recruited drummer and Sydney Conservatorium of Music in Jazz Performance graduate Harry Day to join them in 2016 as their songwriting became increasingly collaborative. Before they’d even played their first show, the newly formed trio set about recording their debut single, “Edge of Town.” They received an immediate boost to their profile after Elton John aired it on his Beats 1 radio show, added it to his playlist, and called himself a fan. They achieved further exposure when they won FBI Radio’s Northern Lights competition, which earned them a spot on the bill at the Iceland Airwaves Music Festival in Reykjavik. Keen to put out their first extended-play release, the trio gathered together tracks like “Doing It Right,” which was recorded at Parliament Studios along with “Edge of Town,” and a number of other compositions recorded in Joy and Fitz’s garage. Their self-titled six-track EP appeared in early 2017, and featured songs full of lo-fi charm matched with big pop hooks. Middle Kids were set to tour extensively in 2017, supporting Cold War Kids on their U.S. tour and performing at SXSW and the Great Escape Festival.