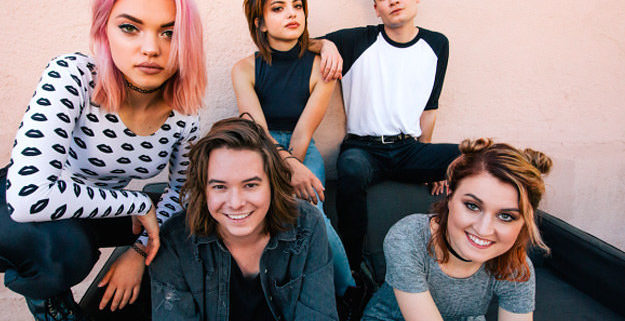 Playing punk-pop with the emphasis on the pop, Los Angeles’ Hey Violet feature guitarist/keyboardist/vocalist Miranda Miller, drummer/vocalist Nia Lovelis, bassist/lead vocalist Rena Lovelis, and guitarist Casey Moreta. The group formed out of the ashes of the hard rock band Cherri Bomb, changing its musical direction after parting ways with vocalist/guitarist Julia Pierce in early 2013. Soon after, Moreta joined as a temporary member but became a full-fledged part of the band that March. In February 2015, the band announced its new name was Hey Violet, and released the single “This Is Why” the following month. Hey Violet signed to 5 Seconds of Summer’s label Hi or Hey Records and toured with the band that May, June, and July in support of their debut EP, I Can Feel It. The band added touring bassist Iain Shipp as a full-fledged member in September 2016, shortly after the release of the poppier Brand New Moves EP, which spawned the hit “Guys My Age.”