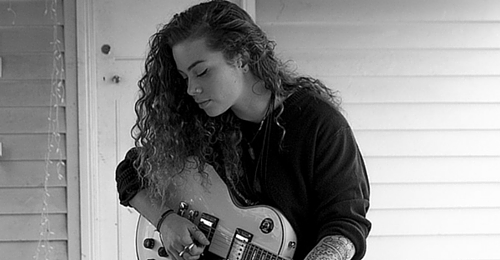 “How do you all even know me?” Tash Sultana asks the crowd during her sold-out show at the Mercury Lounge in New York City’s Lower East Side. The Australian multihyphenate — she sings, plays guitar, loops, beatboxes, and much more — released her debut EP Notion in mid-February, and has since celebrated with a successful U.S. tour.

“I’m seeing it all for the first time,” Sultana tells Billboard while calling from her tour van in San Francisco. “We’ve been doing it straight edge because it’s just too hectic to get really drunk. We’ve been in high spirits, sober spirits.”

Sultana never expected to sell out shows in the States, at least not during her first tour, and echoes the same sentiment she shared at her New York gig several weeks prior: “I’m honestly confused where everybody knows me from.”

Starting as a busker, Sultana enticed crowds with her densely layered production that fuses indie with ambient rock and impressive guitar licks. “[The guitar] is like my third arm,” she says, and estimates her collection to be nearing 35 in total. Both busking and YouTube, the easiest entry point to Sultana, helped her earn the title of Triple J’s Unearthed Artist of the Year in 2016, a feat she followed by signing to Mom + Pop Music at the start of 2017.

Her most-watched video on YouTube, which has garnered over 1.7 million views, is a bedroom recording of her hit song, “Jungle.” The song — and video — best illustrate the sonic science of what Sultana does. In the video, and onstage, she swivels around while tapping looper pedals with her foot, patting a launchpad with her fingers, shredding her guitar and singing through thick clouds of reverb — all self-taught skills (“You only get better at stuff; you don’t get worse,” she says).

The swirl of sounds enveloped in “Jungle” served as a welcome escape at the time Sultana created the song, which she describes as “a product of heartbreak” that was inspired by “a division between my heart and my head.” She relates, “I was at my wits end and just turned the music up, had a jam and that song came out.”

Sultana cites her past toxic relationship as what birthed much of the music on Notion. “I didn’t know what else to do with myself apart from get creative. A lot of us go through that type of stuff, and you have to learn to let it go and move in a different direction.” Considering the success her painful past has brought, she admits, “I’m pretty stoked on it now.”

Of all the talents Sultana has mastered — she can even beatbox on a cheap wooden windpipe — rerouting a negative situation so that the outcome is positive proves her most impressive. Sultana is well aware that her ability to let go of her past and move forward does not come as easily to others. As such, her music doubles as her platform to help those listening find similar clarity. She says she never meant for her music to have such a mission, and has since sought other ways in which she can help. She became a mental health ambassador for Australia’s BeyondBlue, an organization that provides information and support regarding mental health.

“I think it’s really important to have a journey and talk about your healing process, because people are looking for answers and if you [have any] then you should share that knowledge,” she says. “You only have one thing in your mind and that is your mind; once that’s gone, your whole reality is distorted.”

Fortunately, Sultana is well in touch with her reality. While her career continues to climb, she says her only goal is to be happy. “Anything else that comes along will be fine,” she admits. “If I’m in a good headspace, then it doesn’t matter which direction things go.”

WATCH ANDERSON.PAAK RECORDING NEW MUSIC ON A ROOFTOP IN HAWAII
Scroll to top