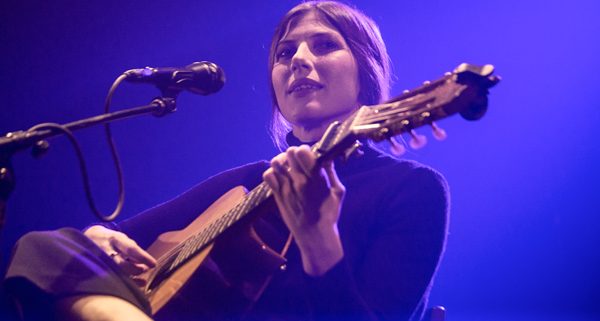 Singer/songwriter Aldous Harding first drew praise for the gothic folk and stark emotionality of her 2015 debut that brought about comparisons to both Kate Bush and Scott Walker. She grew up as Hannah Harding in the town of Lyttelton near Christchurch in New Zealand to musician parents. Her mother was folk singer Lorina Harding, and it was on her Folk-Tui-winning record Clean Break that the 13-year-old Harding made here recording debut. Despite this early foray into the music business, the young Harding had no interest in pursuing a career as a musician, believing it to be a precarious existence. Just a couple of years later, she began to let go of her dreams of becoming a vet when she started singing and writing songs alongside friend and fellow musician Nadia Reid. By 2008 she was performing backup vocals for the traveling string band the Eastern, and Harding got an early break when she was spotted busking by Anika Moa, who on the back of that performance invited the young musician to open for her at her show that same night. In 2012 Harding changed her forename to Aldous and asked Marlon Williams and Ben Edwards to co-produce what would become her debut record. The self-titled release garnered much critical acclaim, and Harding toured the album extensively. For her follow-up, she signed to British independent label 4AD, and enlisted the help of John Parish (Sparklehorse, PJ Harvey) to co-produce the record. Her sophomore album Party was released in 2017, and was preceded by the singles “Horizon” and “Imagining My Man.”

TERRACE MARTIN: ‘I BELIEVE YOU SHOULD BE YOURSELF’