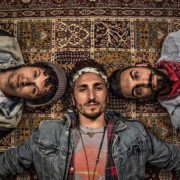 A colorful indie folk outfit based out of Los Angeles, California, Magic Giant’s effervescent blend of folk, pop, and rock invokes names like the Lumineers, Edward Sharpe & the Magnetic Zeros, and Mumford & Sons. Founded in 2014 by multi-instrumentalists Austin Bisnow, Zambricki Li, and Brian Zaghi, the group issued its eponymous debut EP in 2015, and generated some heat with the single “Let It Burn,” which garnered praise from NPR, who called it “a summer festival anthem.” In 2016 the band toured hard, hit the festival circuit, and landed another viral hit with “Set on Fire.” That same year saw Magic Giant ink a deal with Razor & Tie, with plans to release their debut studio long-player in 2017.