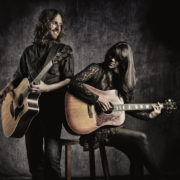 In mid-2011 Hawkes produced, performed and co-wrote with singer-songwriter Miranda Dawn for her debut album, Reason to Feel Alive with co-performances and production by Hawkes. The majority of performances, both duo and solo acoustic, were recorded live to demonstrate the natural life in her emotive songwriting.

Dawn was recognized as a finalist in the Kerrville Folk Festival New Folk songwriting competition and performed with Hawkes at the festival in May 2012.

Dawn and Hawkes continued co-writing and touring together. They released a collaborative effort, Golden Heart, in June 2012. The album features production with their full band and more stripped down live acoustic sound.

In 2013, the duo auditioned for season 6 of the American reality talent show The Voice. Their audition was broadcast on NBC on February 24, 2014, on the inaugural episode of season 6 singing an acoustic version of The Beatles song “I’ve Just Seen a Face”. Two of the four judges, Adam Levine and Shakira pressed the “I Want You” button turning their chairs. “That was my favorite performance I have ever seen — ever — on ‘The Voice'” said Levine. After a brief consultation, they picked to be on Team Adam.

Their iTunes single for “I’ve Just Seen A Face” climbed the chart hitting #1 in Rock sales and #22 across all genres. Their previously released “Golden Heart” EP followed, climbing to #2 in the singer/songwriter chart.

This biography originally appeared on Last.fm.