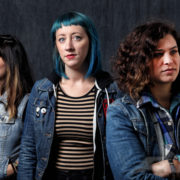 American lo-fi punk rock trio Cayetana rose from the same D.I.Y. scene that produced contemporaries Waxahatchee, Radiator Hospital, and Modern Baseball. Members Kelly Olsen and Allegra Anka first met while enrolled in a New York college before moving back to their hometown of Philadelphia, where they met Augusta Koch. None of them had any formal training on their respective instruments, but they forged ahead with making music on borrowed equipment, channeling the attitude of riot grrrl outfits Sleater-Kinney and Bikini Kill, alongside the indie rock influences of Guided by Voices and the Mountain Goats. Soon after forming in 2012, they released a home-recorded, three-track demo online and proceeded to play as many shows as possible. After hearing their music, independent label Tiny Engines signed the band for their debut album. They spent time tweaking the songs, and headed into the studio with engineer Matt Schimelfenig (Torres, the War on Drugs, the Menzingers) in 2013 and 2014 to complete their first album, Nervous Like Me, which was released mid-2014.