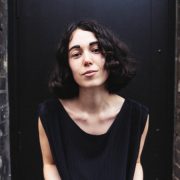 Kelly Lee Owens is a London-based producer, songwriter, and singer known for shadowy but resonant techno-pop. Following a move from her native North Wales, Owens interned at XL Recordings, played bass in the History of Apple Pie, and worked in a string of record shops, including Pure Groove, Rough Trade, and Sister Ray, where she soaked up influences and learned more about the inner workings of music making. While at Pure Groove, she worked with Daniel Avery, who sought her vocals for the Water Jump EP (2012) and Drone Logic (2013). For the latter, Owens appeared on three tracks, one of which she co-wrote. In February 2015, she self-released her debut 12″ single, featuring “Lucid” and the Arthur Russell-inspired “Arthur,” in a small run of 200. The songs were also made available for download. Within a few months, Seb Wildblood & Apes’ “Noshi” was issued with Owens as lead vocalist, and Jenny Hval released Owens’ swift, rumbling club remix of her “Kingsize.” That August, Owens’ “Uncertain” 12″ reached area shops in a similarly small private pressing and was out digitally as well. Her third single, “1 of 3,” was out as a download the following March. Seven months later, Owens made her Smalltown Supersound debut with the Oleic EP, a prelude to her first full-length. Led by “Anxi.,” a collaboration with Hval, Owens’ self-titled album arrived on Smalltown Supersound in March 2017.

This article was originally posted on AllMusic. 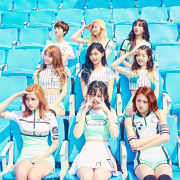 They’ve conquered South Korea with their infectious hits, and in the music video for their latest single “Signal,” K-pop girl group TWICE looks to extend their reach off-planet.

The nine-member act dropped “Signal,” the title track from their fourth EP, on Monday (May 15) simultaneously with a quirky music video that had the song’s erratic sound acting as the backdrop to TWICE’s attempt at winning over the heart of a blue-faced alien.

Twice’s first song produced by JY Park, the founder and head of their label JYP Entertainment, “Signal” diverges from the girl group’s vibrant brand of colorful, effusive pop. Instead, the bass-focused single begins with a deadpan rap that builds into a groovy electropop melody used to relay the song’s earworm of a hook, while the talk-rap serves as a clapping refrain throughout the remainder of the track before turning into the “Signal” outro.

Though the song is something new for Twice, the brightly hued music video is reminiscent of some of their past videos: the zombies of their 2015 debut track “Like Ooh-Ahh” are swapped with aliens, while the camera-headed mascot of last year’s “Cheer Up” returns for a cameo. And, like all Twice videos, each member of the girl group is differentiated by an identifying factor. In this case, each member has a unique superpower with which she tries to impress the extraterrestrial lover.

Along with the title track, Twice’s Signal EP contains six other tracks, including “Eyes Eyes Eyes,” a light-hearted, airy song with lyrics written by members Jihyo and Chaeyoung.

With over half a million views on YouTube and a presence on multiple Billboard charts, Twice has become one of the K-pop industry’s most dominant girl groups since “Like Ooh-Ahh” was released two years ago. Their last album, Twicecoaster: Lane 2, peaked at No. 4 on the World Albums chart, while their February single “Knock Knock” hit No. 5 on the World Digital Song Sales chart.

The release of Signal precedes Twice’s attendance at KCON NY next month, where they’ll perform on June 24 alongside K-pop boy bands CNBLUE, NCT 127 and Up10tion. 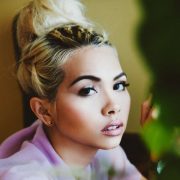 A multi-talented American actress, pop singer, and songwriter, Hayley Kiyoko Alcroft was born on April 3, 1991, in Los Angeles, California. The daughter of actor/comedian Jamie Alcroft and Japanese-Canadian figure skater Sarah Kawahara, Kiyoko began acting in commercials and taking drum lessons while still in her single digits. Her middle- and high-school years were spent participating in student government, acting in plays, and creating and choreographing the award-winning Aurora High Step Team. After graduating, she focused on her music and acting career, with notable roles as Stella Yamada in the popular Disney Channel film Lemonade Mouth, and as Velma Dinkley in a pair of live-action Scooby Doo films. In 2007 she joined the pop girl group the Stunners, releasing an EP and a handful of popular singles including “Bubblegum” and “We Got It.” In 2013 she issued her first solo EP, A Belle to Remember, which included the single “Rich Youth.” Arriving in 2015, the This Side of Paradise EP proved to be Kiyoko’s breakthrough, with the evocative electropop single “Girls Like Girls” and its accompanying video garnering over 40 million YouTube views. In 2016 Kiyoko unleashed her major-label debut EP, Citrine, which included the airy pop confections “Pretty Girl” and “Palace.”